Ha Long Bay. I’m lying in the sun. In just a few hours I’ll be back in Hanoi and the next morning I’ll be on my way to Ninh Binh. And it will be exactly like in Ha Long, but with rice fields instead of water and bikes instead of a boat. I’m lying in the sun, daydreaming about these rice fields and I’m checking my mailbox. Long story short: our hotel cancelled the reservation, there’ heavy flooding in Ninh Binh, actually it’s a natural disaster, our hotel in Hanoi forbids us to go to Ninh Binh, it’s serious, over 40 people died. October is perfect for Northern Vietnam, they said. It’s not raining. They said.

It’s Friday, 5pm. There are 2 options: we’re staying in Hanoi till Sunday evening when we have a flight to Ho Chi Minh City or we’re not staying in Hanoi. One hour and 300 USD later we’re on our way to the airport to catch a flight to Da Nang which departures in 4 hours. We’re going to Hoi An!

Hoi An was my dream ever since I’ve learned it exists. Unfortunately it’s in central Vietnam, where the rainy season is in full force in October and so are typhoons. So when I was planning our trip, I decided that I’m a smart girl I’ll skip Hoi An and focus on Northern Vietnam. Because it’s not raining in the North in October. The weather, VietJet Air and their last minute prices (300 USD for 2 people and 2 backpacks, Hanoi – Da Nang – Hanoi) made my dream come true.

For centuries Hoi An was a traiding port. Chinese merchants were coming here with the monsoon winds, doing their business and going but home with the winds blowing in the other direction. At some point they settled in Hoi An, making their warehouses bigger and changing temporary homes into regular houses. Chinese weren’t the only merchants there. Japaness, Portuguese, Indians, Dutch, you name it. In the 1590s Japanese merchants decided to join their quarter with Chinese quarter by building a bridge – a covered Japanese Bridge. The only bridge in the world with a walk-in Buddhist temple.

We had only 24 hours in Hoi An. Gods of Vietnam forced us to run away from the North, but apparently they were proud of us waking up early in the morning in Hoi An. It didn’t rain. Hoi An at 8am is amazing. The later in the day it gets, the more crowded the city gets. In the evening you elbows are useful. Hoi An is famous for its lanterns and yellow houses and probably this is the reason why it’s called the most romantic city in Vietnam. And it should be called the most crowded. But it is beautiful. And charming. And romantic. Especially in the evening, when you’re walking down the street filled with lanterns and someone plays a piano in one of the many restaurant. So cliche, so beautiful. 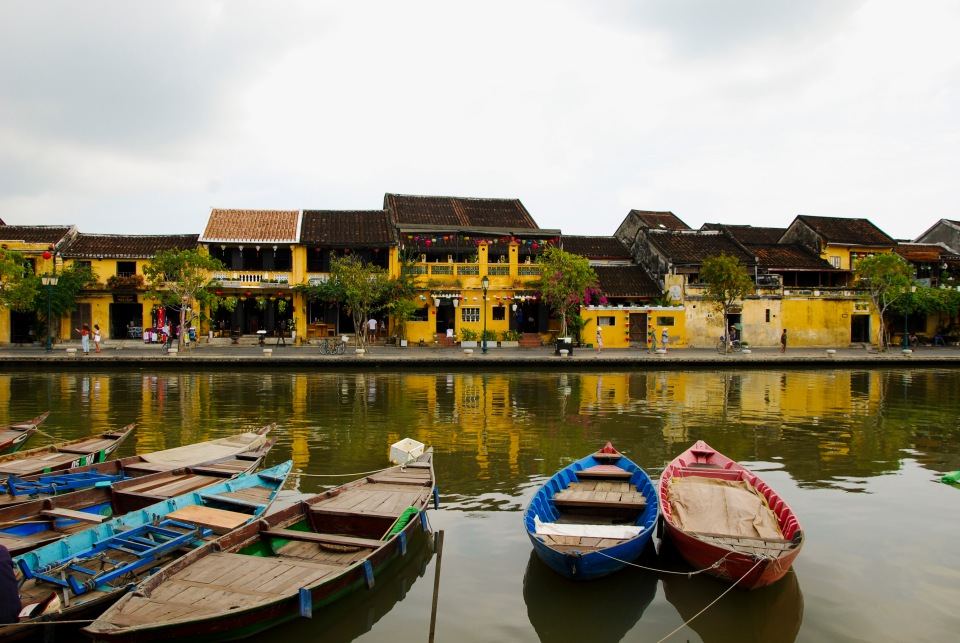 Hoi An is not only about lanterns. We’re renting bikes from older ladies standing in front of our hotel and we’re heading to the beach. We’re passing by the happiest Vietnamese in the whole country, who is taking a nap on his cow’s back, but we’re not making it to the beach. We made it to the bike parkings where owners tried to stop us quite aggressively and tried to charge us the same price for parking as we paid for our bikes. Thanks, but no. We’re going back to Hoi An, through the city to the other side in the search of rice fields and bamboo bridges.We found karaoke bar (national sport in Vietnam), a cow who didn’t like us and went after us and a Kamaz truck driving through a bridge with load restriction 1.5 tones. No spectacular rice fields spreading out to the horizon. Instagram has fooled me. Or I was searching on the wrong side of the city.

We went back to Hoi An. Did I mention it wasn’t raining? Sightseeing is great, but food is also amazing. And when in Hoi An, you eat baguettes. So we’re having baguettes in Banh Mi Phoung. This. Is. Incredible. It’s not a regular baguette, it’s the best sandwich in the world. We’re back there in the evening and once more early in the morning.

It didn’t rain. After few hours all temples looked the same, so did yellow houses. But Kazik Park was something different. It’s not really a park, rather a square with a monument of Polish restorer Kazimierz Kwiatkowski, called Kazik. He spent 16 years in Vietnam working on monuments in My Son and Hue. He has also saved Hoi An. Climate in Vietnam is very humid, so old houses have no chances to survive. They survived in Hoi An thanks to Kazik, who asked UNESCO to protect the old quarter of the city. It became a world heritage site after his death. Kazik died in Vietnam, he wanted to be buried in his beloved My Son, but Vietnamese decided it would be better to honor him with a celebration and send him to Poland. They have a thing with festive funerals…

In on of the galleries we bought a souvenir we never ever thought we would buy. Two paintings. As gifts. How do you travel with two paintings? Remove it from the stretcher bar, roll, punt inside a plastic pipe and secure both ends with a tape. As easy as that. The paintings are probably made in 1000 copies, but it doesn’t matter. They’re pretty. Just like made-to-measure dresses which you can order everywhere. I really regretted having only 24 hours in this city… Oh, have I mentioned it wasn’t raining?

We admired a sunset from the rooftop of a coffee place, drinking a very sweet Vietnamese coffee and apparently becoming models for a photoshoot. Once the sun set, we admired the lanterns, tried to find our way in the huge crowd and we were very happy that in the morning we had the whole city for ourselves.

At 8am we were picked up to go to the Da Nang Airport. At the airport we realized, there’s no flight to Hanoi at 10am. VietJet Air rescheduled our flight to 12pm. 2 hours of waiting and we could have spent them walking in Hoi An. And eating baguettes. Thank you, VietJet.

From Da Nang Airport take Uber to Hoi An. On the way back, order a pick up in one of many stand in the old quarter. Legend says, there is a bus from Hoi An to the airport. We tried to find a bus stop, but we failed.

When you have only 24h, find a hotel close to the old quarter. We got a really good deal on a beautiful Thanh Van 1. An indoor pool included.

If you have more than 24h, treat yourself with a made-to-measure dress/suit/shirt/coat/whatever. We met a girl from England who ordered her wedding dress in Hoi An.

You can go to the beach by bike. Remember to haggle at the bike parking.

In Hoi An we bought the prettiest souvenirs.

Why would you want to visit Dubai?

On a bike around ruins – Ayutthaya