I have an idea in mind, based on my short, but cool trip to Tuscany. Tuscany has colors. Cities have colors. To be more specific, each city has one color. Or shade. And it goes like this:

I landed in Bologna. Bus, train, train and I reached my destination, a huge camping in a small town. But let’s start from the beginning. So I landed in Bologna and figured out it would be nice to see something. How much time do I have? 1,5h? How long does it take to walk from the railway station to the city center? 20 min? Ok, let’s go! And I went. Bologna is tiring. Or it was on Wednesday at 4pm, when I was trying to walk in this crowd. I reached Piazza Maggiore. I guess we are living in funny times when everything is being renovated. This time scaffoldings were covering Fountain of Neptune. Well, ok. Short stroll around the main square and I was on my way back. And I bumped into a procession. Procession which took whole street and both pavements. For a minute I thought maybe Pope was in the city. Scusi, scusi, I just want to get to the train station. Quick walk through the park was a perfect decision. Red Bologna looked really pretty from the Montagnola Park. Even quicker espresso at the train station and I was ready for Florence. I went back to Bologna few days later, on my way back home. It was an early morning and I walked the same path again. I really enjoy sightseeing in the morning, when streets are empty and the air is fresh. Once again, I didn’t have a lot of time, but did have an espresso in Vittorio Emanuele Cafe (an average one) at Piazza Maggiore, took some pictures and went back. Bologna was still red. 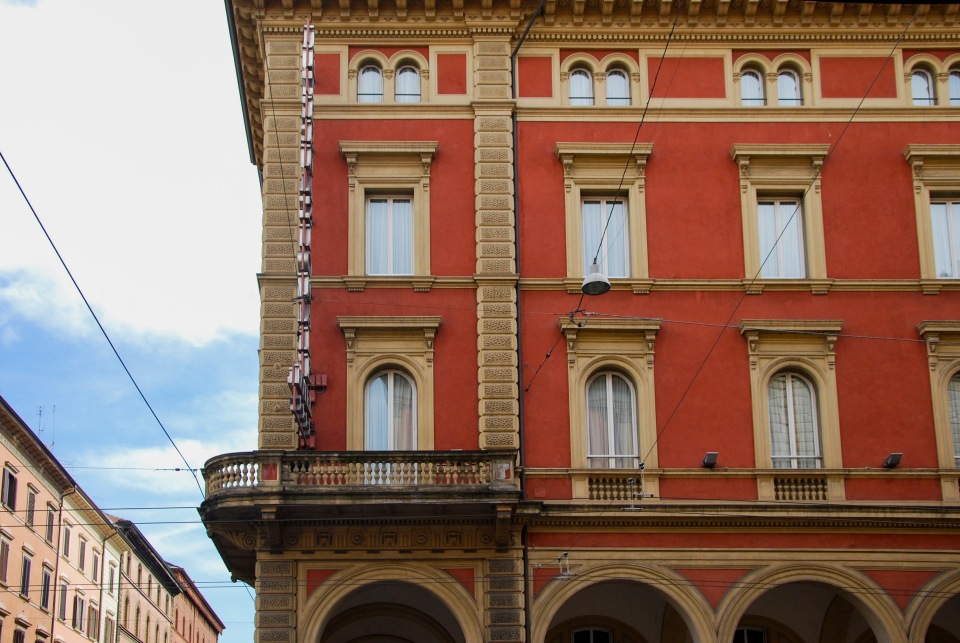 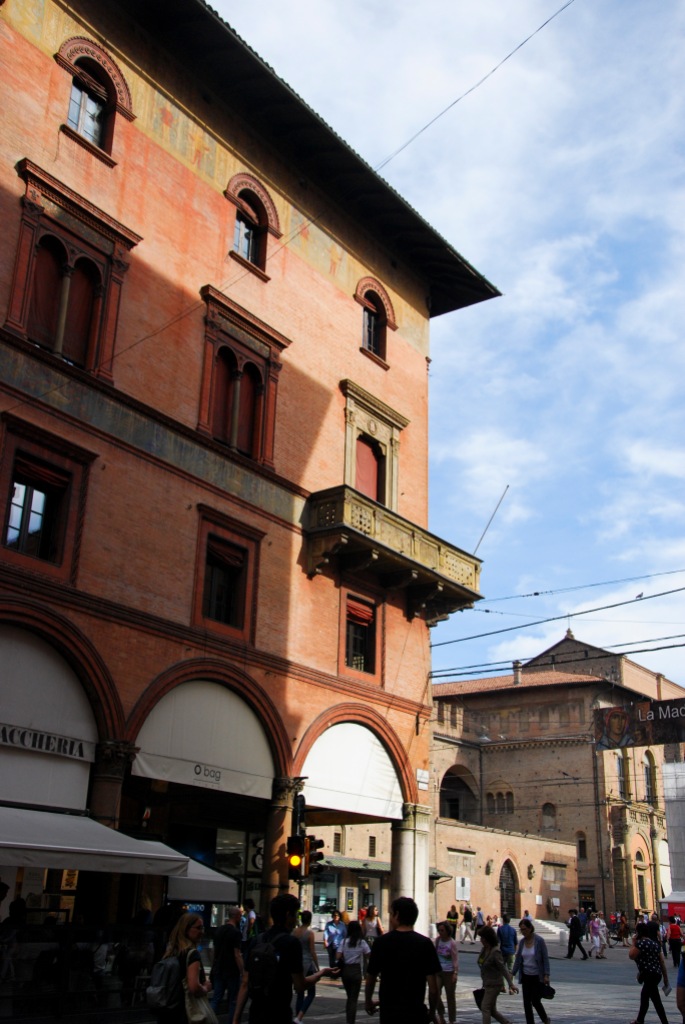 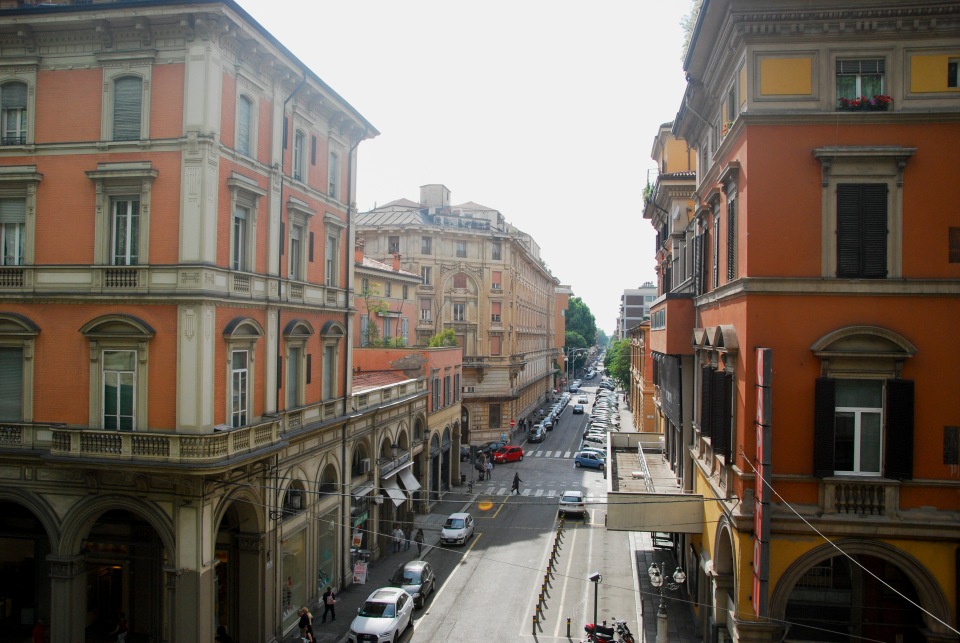 It took 35-40 minutes for a superfast Italian train to get from Bologna to Florence (100km). In the Economy Premium ticket, prosecco is included. Well, prosecco or coffee, but come on, the choice is obvious. After superfast train, there was a superfast change to superfast regional train. I love Italian trains. But let’s stay in Florence. Florence is yellow. Yellow, beige, cream. For sure it’s not red. But Florence is a whole different story and I will get back to that. For now, it’s important that this city is yellow. 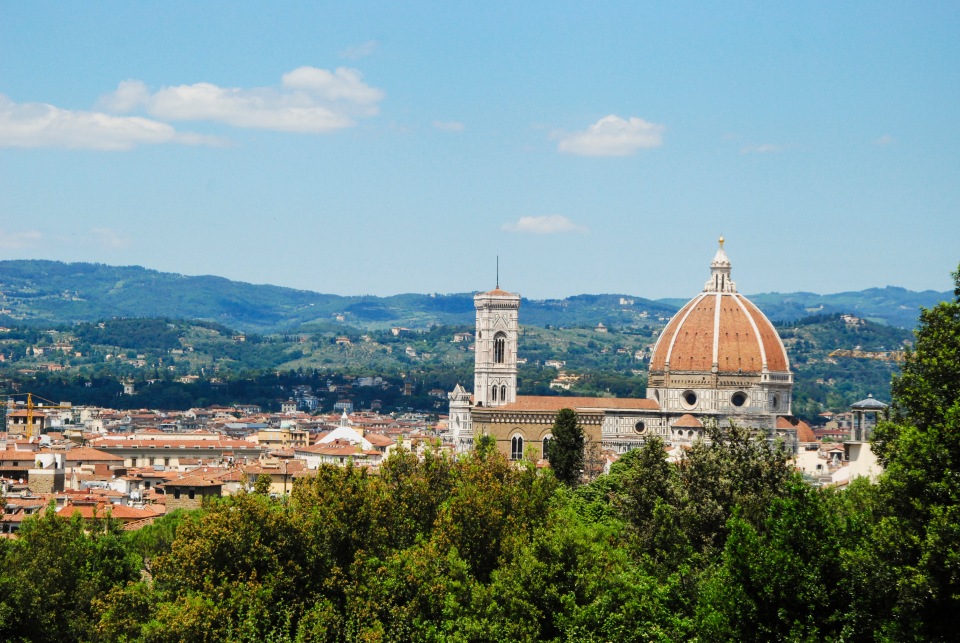 I could say that Siena has a color of burnt sienna, but this color frustrated me when I was a kid. So I will stick to the version that Siena is brown. Brownish-red. Reddish-brown. Ok, sometimes it was yellow. And I think it was the most impressive city for me.

Siena means pretty views (I love cities on hills) and old town, were getting lost is a pleasure. But it’s not if you’re driving a car in Siena and you’re lost, because you have missed the parking and your GPS has a different view on which turn is forbidden and which is not. But escalator from the parking (via Fontebranda) to the cathedral is nice. The cathedral is nice, because it has stripes and I love stripes. Piazza del Campo is nice – main square which is not flat, but looks like a shell, as it is easier to get rid of the rain. It’s nice to have a coffee on Piazza del Campo and ¼ of a huge pizza for 2,50 EUR (corner of Piazza del Campo and via Rinaldini). Frankly speaking, I could just go from one restaurant to another. Food based tourism is my thing. 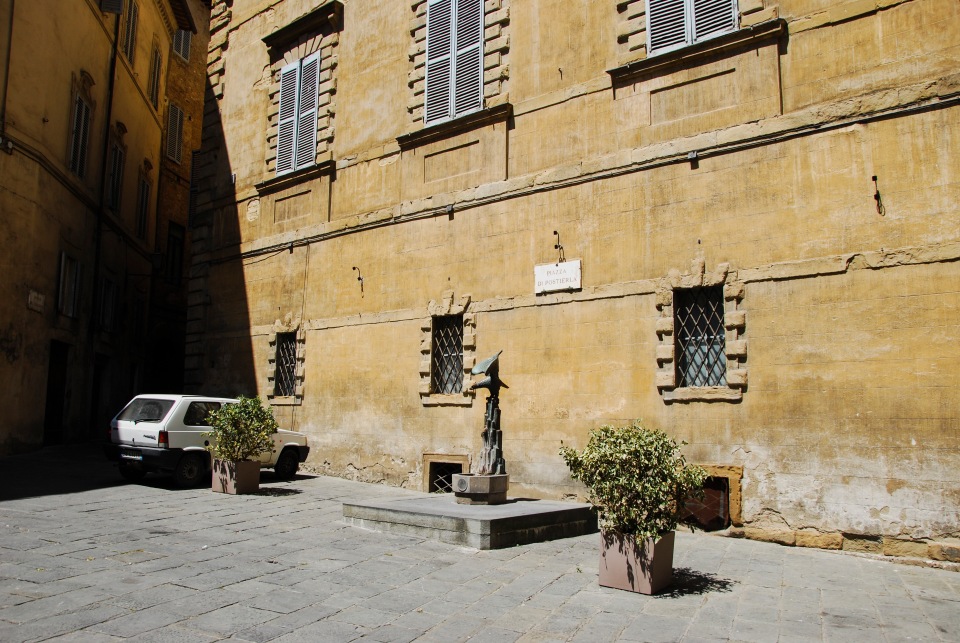 It’s definitely almost empty. After overcrowded Siena, an afternoon in the castle of Monteriggioni was a nice change. Built on a hill, surrounded with a wall, Monteriggioni has one street and a main square. And it is charming. Modest church is also a nice change from humongous and terribly expensive cathedrals. And even a waiter at a pizzeria is less nervous. 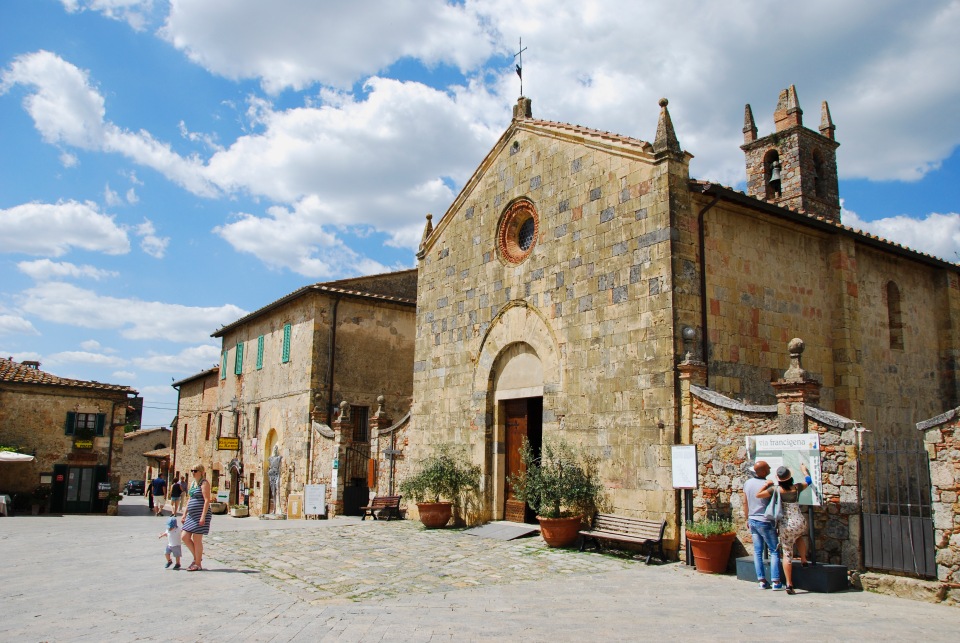 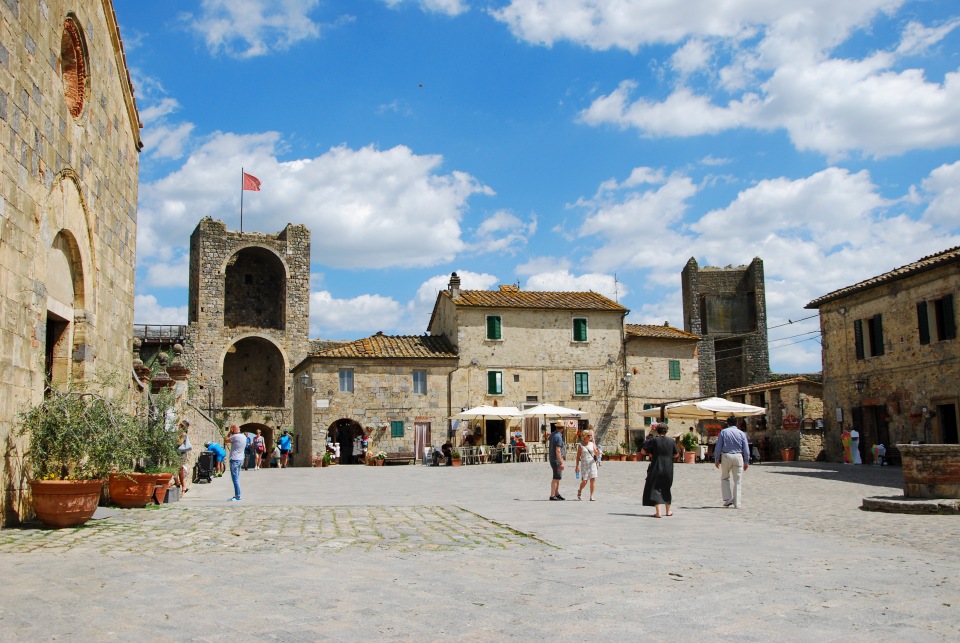 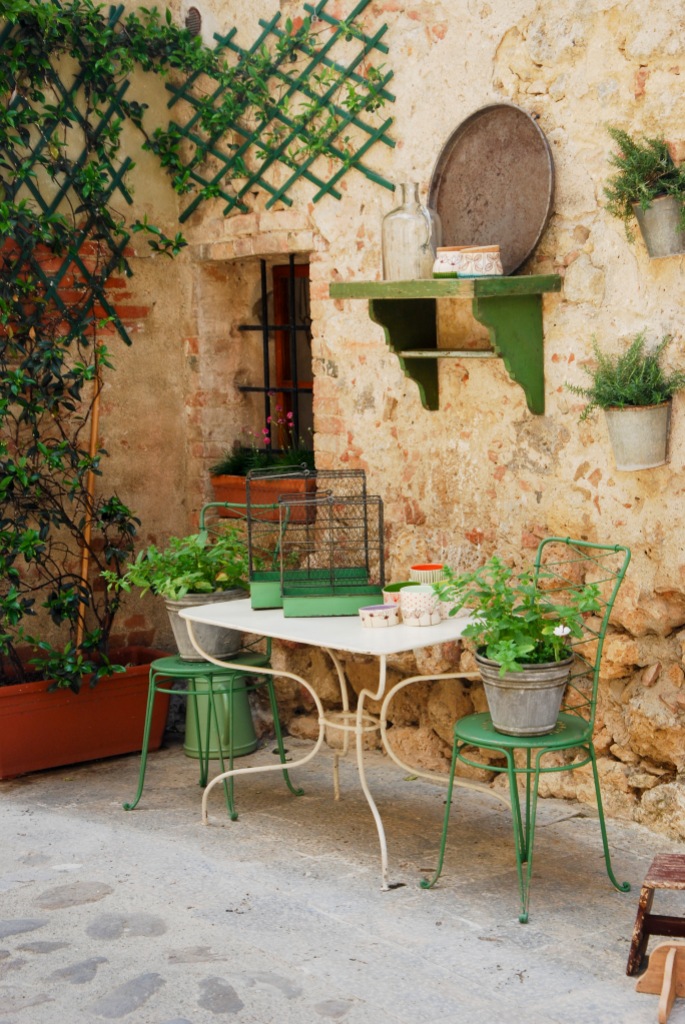 Greve in Chianti is green

The road to Greve in Chianti is green as so are its surroundings. It’s a local capital of wine with hills and wineries. Tuscany here is a bit different than in pictures. There are more trees, bushes, whole forests. For a moment I’m thinking if it’s disappointing. Where is my lonely house at the top of the hill and cypresses? But it’s not disappointing. I love nature. And closer to Siena there are more vineries, so let’s say it’s a kind of compromise. 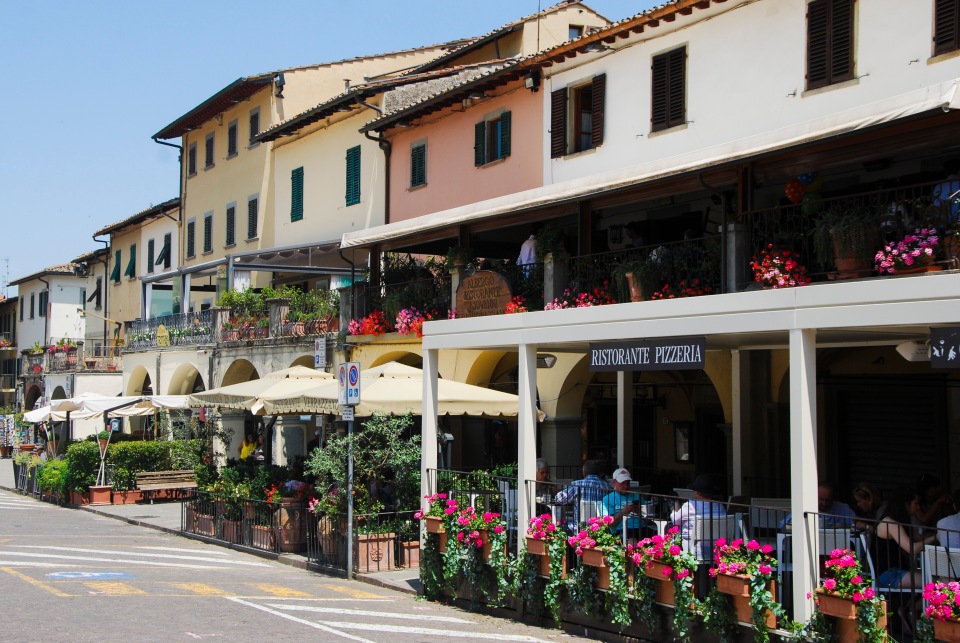